Sylvan Shores is a prosperous waterfront community—surrounded by the South River, Granville Creek, Hardestys Cove, and Beards Creek waterways—in the census-designated area of Riva, just west of Annapolis, within Anne Arundel County in the great Free State of Maryland. Community amenities are managed by the Sylvan Shores Services Company—a Maryland Corporation operating as a non-profit—with a Board of Directors comprised of volunteer community members, elected by the membership, for the good and the benefit of the community and its members.

Due to its scenic and advantageous waterfront location near the cultural and economic hubs of Baltimore, Annapolis, and Washington, D.C., Sylvan Shores has a storied local history.

Sylvan Shores in the Nineteenth Century

In the antebellum 1800s, the area now known as Sylvan Shores was a slave plantation owned by the Peach family. What is now the Post Office and Fire House area along Riva Road was known as Taylorsville (so-named after Zachariah Taylor, our nation’s twelfth President), which was an important village and trade center. A Taylorsville Church was built with its graveyard between the plantation area and the Taylorsville General Store.

The Church eventually fell into disrepair and was sold and torn down, but the small cemetery can still be seen on the north side of Riva Road and is kept up by descendants of those laid to rest there, with very old grave stones in the underbrush in the trees.

In 1929, Mr. Carl W. Riddick, a former Congressman from Montana, purchased the Sylvan Shores site for a summer-home development. Streets were laid out, 100 trees and flowering shrubs were planted, and six experimental cottages were built, including Mr. Riddick’s own home on the waterfront (which is still standing along the shores of Hardestys Cove and well taken care of!). The first tenant was Mrs. Anna Higham, who paid $1 down and, in 30 days, moved into her cottage. By 1931 several cottages were built, some of them are believed to be classic Sears Catalog homes.

Sylvan Shores was platted in different sections from 1930 to 1948. The “Circle Park” Addition (portions of Woodside, Paradise and Circle Road) was amended to Sylvan Shores in 1932. From 1935-1937, the “Forest Addition” across Riva Road, also referred to as Tarzan Forest, was platted and developed along Hardestys Cove. In 1939, the land that includes the ball park area was divided and developed, and the Sunset Heights addition was added in in 1948 (properties along Meadow, Shadyside, Remital and the ball park), thus completing the present Sylvan Shores community extent. 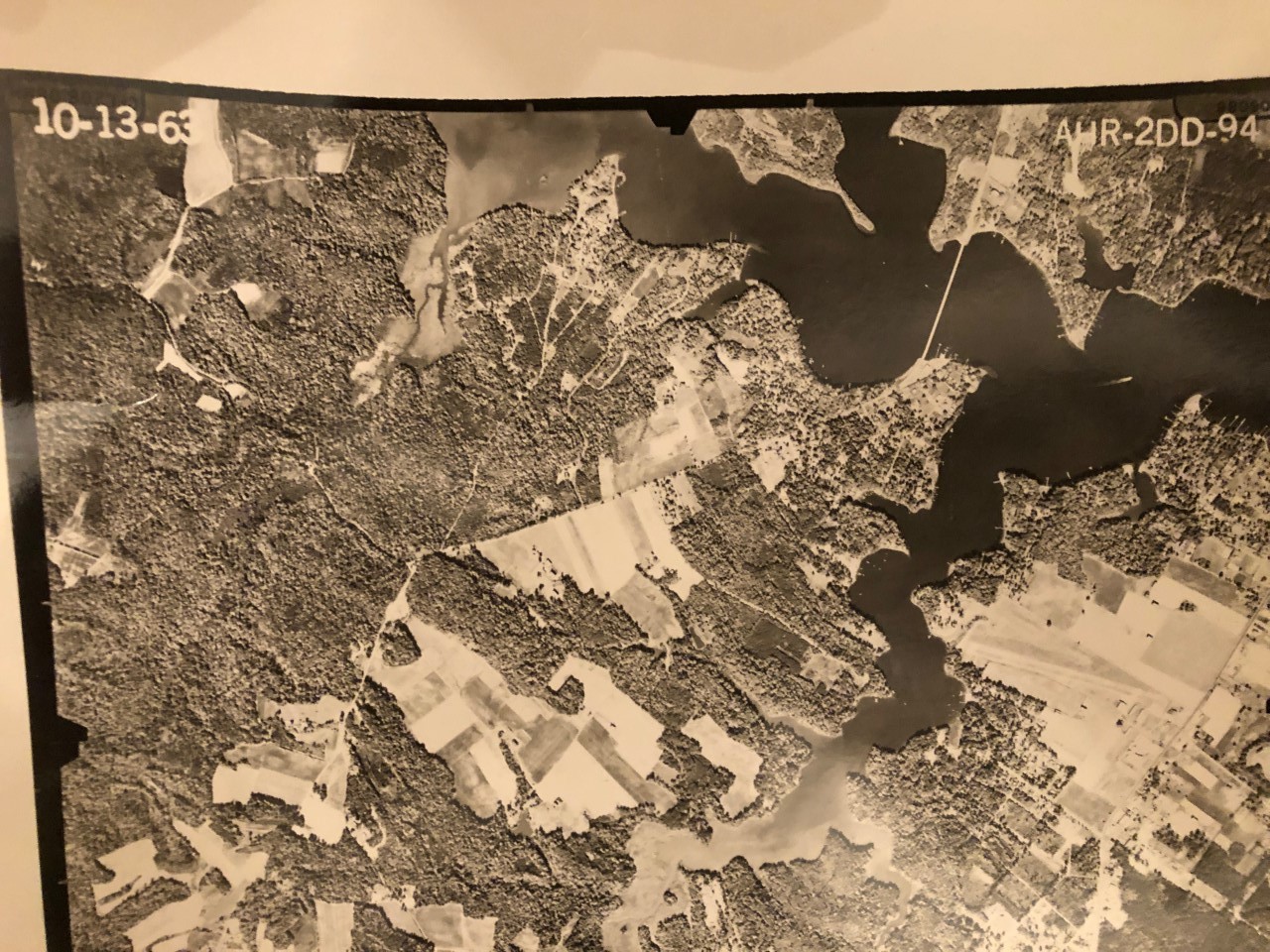 An aerial photograph of the Sylvan Shores and Riva area, October, 1963. From the Maryland State Archives: https://msa.maryland.gov/

Further Development through the Twentieth Century

Some of the sections and additions went through several iterations and corrections in between. At one point there was a Peach Road (probably named after the original plantation owners) which connected to Cove Road along the lower “ballpark” area (where the sand filter pit is now). Peach Road became Poplar Road and the course of it changed to run more parallel with Orchard Road. Curiously, the 1944 plat shows both a Peach Road and Poplar Road.

Up until 1947 when he retired, Mr. Riddick assumed responsibility for running the services for the community. In May of 1947, a non-profit corporation, Sylvan Shores Services Company, Inc. (SSSC, or the “Corporation”) was formed, and property owners were eligible to buy a share of stock which conferred voting rights. In 1956 the Corporation sold a bond issue to raise funds to install a then-modern water and septic system. The bonds were fully paid off in 1964.

It was in 1949 that the Riddicks deeded all community services and property, such as water and sewer systems, roads, parkways, beaches, riparian rights, etc., to the Corporation. The Clubhouse property was deeded in 1951 to the Sylvan Shores Community Center Inc., which then deeded the Clubhouse to SSSC in 1958. The Corporation, through its Board of Directors, assumed responsibility for managing the services and affairs of the community and has continued to do so to the present day.

Sylvan Shores continued to grow and thrive through the 20th Century.

Some apocryphal stories list Sylvan Shores as a bird sanctuary at one point, and, like many waterfront communities in the area, a vacation home for people who wanted to get away from the Baltimore and Washington, DC city life for a little while. Some of the original cottages were used as a Jewish summer camp in the 1950s.

An official plat from 1937 shows the road directly in front of the Forest Park (currently Forest Road) before Hoot Owl Road starts was called Bridge Road. There is evidence that the drain ditch at the end of the opposite property, which allows runoff through Forest Park into Hardestys Cove, may have been part of a small bridge going over a drain or small stream.

Hardestys Cove (no apostrophe) on the Forest side of Riva Rd. is probably so-named for the Hardesty family, who has resided in Riva for generations. The 1933 deed from the Hodges family to Carl Riddick shows it as “Hardesty’s Cove” with an apostrophe. The 1937 Forest Addition plat shows it as “Hardestys Cove” with no apostrophe. Curiously, the 1949 deed from Carl Riddick to the SSSC, as well as the 1960 Confirmatory Deed, shows the area as “Hardesty Cove” with no “s.” However, as of January 2020, most online maps (Google, Open Street Maps, Anne Arundel County ArcGIS maps, US Geological Survey) show the area as Hardestys Cove (with an “s” but no apostrophe), possibly meaning “cove for the Hardestys” and not “cove owned by Hardesty.”

Recognizing the investment required to maintain and improve community assets for the benefit of all owners, residents, and guests, the community petitioned the County to establish a Special Community Benefit District (SCBD). The Sylvan Shores Special Community Benefit District was established by legislation in April 2015, for the following purposes:

Today, Sylvan Shores continues to thrive and develop, with new homes built in both South River and Forest locations while the community continues to maintain and improve waterfront and community amenities. As of January 2020, there are over 200 homes in Sylvan Shores, a flourishing and welcoming atmosphere that continues to grow and provide stewardship to our waterfront community.

We pride ourselves on bringing out the very best in our community and we look forward to making you a part of it — contact our team today.

Sylvan Shores Services Company, Inc. (SSSC) is a Maryland Corporation operating as a non-profit, which owns and maintains amenities for the benefit of the owners and residents of the Sylvan Shores community. SSSC also administers the Sylvan Shores Special Community Benefit District, an Anne Arundel County special taxing district. SSSC is managed by a volunteer board of directors who are community members.